“Shannon Liss-Riordan has been a tireless public servant, protecting working families in the Commonwealth and beyond. Shannon has a track record of standing up and winning landmark cases against corporate giants like Starbucks, FedEx, and American Airlines,” said MBTU President Frank Callahan. “As the people’s lawyer, she’ll continue to challenge the status quo and ensure the system is fair and equitable for the citizens of Massachusetts, and we are proud to endorse her for Attorney General.”

For over a hundred years, Massachusetts Building Trades Unions (MBTU) has been dedicated to helping working people improve their quality of life. It has 63 member locals representing more than 75,000 working men and women across the state.

“I am honored to receive the endorsement of the Massachusetts Building Trades Unions. For years, I have been proud to partner with MBTU and the workers within their unions to strengthen worker protections and combat wage theft,” said Shannon Liss-Riordan. “Wage theft and worker misclassification continue to run rampant in the construction industry. As your next Attorney General, I will take a systemic approach to combating wage theft and will ramp up enforcement actions through the Fair Labor Division to ensure that workers are paid the wages they are owed immediately.”

Through the efforts of their locals, union members receive the best training available, vital healthcare coverage, and the security of pension and annuity benefits. In addition, through joint investments between labor and management, employers train current and future employees. This collaborative effort between contractors and member unions benefits customers because, with trained workers, the job is done right the first time. For the unions represented by the MBTU, their goal has always been, and continues to be, improving the standard of living for construction workers and their families throughout the state. By achieving this goal, everyone benefits, including members, employers, customers, and most importantly, the communities where our members live and work

The combined 63 individual building trades unions of MBTU provide healthcare to 260,000 people, retirement benefits to 40,000 seniors, and drive the Massachusetts economy with a $3.65 billion impact through housing construction projects alone. 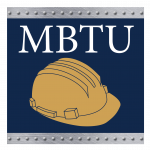