NEW BEDFORD, MASS., JULY 16, 2021…..From the White House to the State House to City Hall, policymakers from all levels of government gathered on the edge of New Bedford Harbor on Friday to mark an agreement that will guarantee at least 500 union workers will have a hand in building the country’s first significant offshore wind farm.

“Everyone who is anyone in Massachusetts government is here,” U.S. Rep. Bill Keating said as he surveyed the crowd of dignitaries, union workers and others assembled under a tent at the New Bedford Marine Commerce Terminal.

The occasion was the signing of a project labor agreement between the Southeastern Massachusetts Building Trades Council and Vineyard Wind to ensure hundreds of union jobs for the construction, manufacturing, installation and maintenance of the Vineyard Wind I project that is expected to bring about 800 megawatts of power online for Massachusetts by the end of 2023.

The in-person and on-location event also served as a celebration of the progress of offshore wind and Vineyard Wind I, a project that has navigated choppy seas and withstood delays to remain at the forefront of what is expected to become a massive new industry up and down the East Coast.

“It has been an experience to be the first one, it’s a blessing and a curse,” Vineyard Wind CEO Lars Pedersen said Friday. “I’m really happy that we’re at the end of the beginning because I wouldn’t want to do it again.”

The Biden administration kicked off a flurry of offshore wind actions this spring by approving the project, which is in line to be the nation’s first utility-scale offshore wind farm. Vineyard Wind is working towards the financial close of the project, expected by the end of this year.

“It would be impossible to overstate how critical this project is, not just to the commonwealth’s goals but to the country’s climate goals. As President Biden has ramped up our federal ambition on this issue, the commonwealth has done the same,” Theoharides said.

Vineyard Wind I was the first offshore wind project selected by Massachusetts utility companies with input from the Baker administration to fulfill part of a 2016 clean energy law. It is projected to generate cleaner electricity for more than 400,000 homes and businesses in Massachusetts, produce at least 3,600 jobs, reduce costs for Massachusetts ratepayers by an estimated $1.4 billion, and eliminate 1.68 million metric tons of carbon dioxide emissions annually.

The continued development of the offshore wind sector is seen as crucial to meeting the new climate goals Massachusetts has adopted, specifically the requirement to achieve net-zero carbon emissions by 2050. By then, Baker administration officials expect to have 25 gigawatts of offshore wind (equivalent to about 31 Vineyard Wind Is) operating off the coast and will have to hit a pace in the 2030s of bringing about 1 GW of new wind power online each year to get there.

The project planned for 15 miles south of Martha’s Vineyard, however, still has opponents, including some in the commercial fishing industry and some environmentalists worried about how the development will impact the migratory patterns of rights whales and other marine life.

Frank Callahan, president of the Massachusetts Building Trades Council, said Friday’s PLA signing and event is proof that organized labor and the renewable energy industry can work together. He said the document should be a model for other projects along the East Coast.

“Throughout my career … there’s been this false choice, this uneasy tension at best and conflict at worst, between organized labor and the environmental community, and the push for renewable energy. It has always been presented that in order to convert to a renewable energy economy, we have to sacrifice good union jobs,” he said. “I’m here to say that with this project, we’re showing that that’s been a false choice. It’s not true, it wasn’t true then, it’s not true today and it’s not true tomorrow. We can do both, we can have both. We’re going to have both here off the coast of Massachusetts with Vineyard Wind.”

McCarthy, who served in state environmental affairs posts in Massachusetts before rising to EPA administrator under President Obama, got one of the loudest ovations of the day and assured the crowd that President Joe Biden is behind the burgeoning offshore wind industry.

Roy, the relatively new Telecommunications, Utilities and Energy Committee chairman who has been tasked by the House speaker with finding ways to improve the offshore wind workforce pipeline, asked McCarthy to pass along a message to Biden when she returns to the White House.

It’s a phrase Biden will recognize since he whispered it into Obama’s ear when he signed the Affordable Care Act in 2010, Roy said.

“This is a big effing deal,” he told McCarthy to say to the president, paraphrasing Biden’s expletive-laced exclamation.

The New Bedford Marine Commerce Terminal, a facility the state has invested at least $100 million into, will serve as the primary staging and deployment bases for Vineyard Wind I and the 804-MW Mayflower Wind project, which is also under contract to deliver power to Massachusetts.

The 29-acre New Bedford facility was built by and is operated by the Massachusetts Clean Energy Center to support the construction, assembly and installation of offshore wind turbines, and to handle cargo shipments. EEA has called it “the first port in North America specifically purpose-built to support the staging and installation of offshore wind components.”

Last year, when the Baker administration announced that Vineyard Wind and Mayflower Wind had each signed an agreement to use the New Bedford terminal as their primary land bases, officials said the agreements “commit the facility to full-time offshore wind work from 2023 into 2027 and are worth more than $32.5 million.”

A MassCEC-commissioned assessment last year determined the two projects together could generate between $1.4 billion to $2.1 billion in total economic impact for Massachusetts and could support between 2,000 and 3,000 “direct job years” over the next decade.

An upcoming state solicitation seeks a project of up to 1,600 MW that can come online by the end of the decade. Bids are due in September and the group of utility executives and state officials evaluating submissions is expected to select a project by December. 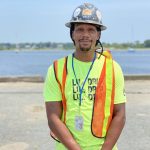 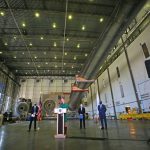