While Boston, Cambridge and some other cities have halted construction projects, the Baker administration has not issued a statewide order.

BOSTON — As many as 13,000 carpenters in Massachusetts were set to go on strike Monday over concerns that state and federal regulators aren’t doing enough to keep job sites safe from the spread of the new coronavirus.

The North Atlantic States Regional Council of Carpenters, which represents about 10,000 workers in Massachusetts, ordered workers to strike beginning Monday.

“In recent days as the number of COVID-19 confirmed cases and deaths has dramatically increased, it has become apparent that working on construction sites in Massachusetts is abnormally dangerous, and that continuing to work on construction sites poses an immediate threat of harm to the health and safety of my members and the public,” the council’s executive secretary Thomas J. Flynn wrote in a letter to members.

The union says the Trump administration’s order blocking OSHA from issuing regulations to protect workers from COVID-19, coupled with Massachusetts Gov. Charlie Baker’s decision to not shut down construction sites, has increased risks for its members. While Boston, Cambridge and some other cities have halted construction projects, Baker has left the decision to local government officials and has not issued a statewide order.

The Baker administration has issued guidelines for reducing the spread of the coronavirus on construction sites. But the council, along with the Massachusetts Building Trades Council and other labor unions, have asked Baker for a statewide order closing job sites. They say local officials do not have the resources to enforce emergency regulations for construction sites that are aimed at slowing the spread of the coronavirus.

Read the article on Patch.com. 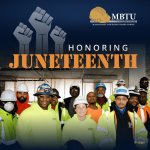