MBTC President Frank Callahan sat down for an interview with WBZ 1030 AM’s Shari Small to discuss how women building the Bay State are on the rise.

Take a listen, and check out the transcript below.

Anchor: Here in Massachusetts, more women than ever are building a life in the construction industry. WBZ’s Shari Small tells us the goal is to keep those numbers growing.

Shari Small: The number of women in Massachusetts entering the building trades through union apprentice programs is nearly triple the national average of women in the trades. Massachusetts Building Trades Council President Frank Callahan wants that trend to continue to rise.

President Frank Callahan: Our goal is to get 20 percent women in the union construction workforce by 2020. And the way to do that is to train them.

Savy Man-Doherty: I was working a minimum wage job, making about $12.50 an hour.

Shari Small: After a five-year program, she’s now a journeyman.

Savy Man-Doherty: Now, I was able to buy a house last year, right after I graduated. I love it! 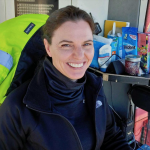