The Worcester-Fitchburg Building Trades Council has elected Jorge Rivera, a 20-year union member, as its new president, the council announced on Monday, making him the first Latino to head the group.

Rivera currently serves as the director of organizing for IUPAT DC 35.

“It’s a privilege to represent the Worcester-Fitchburg Building Trades Council as President,” said Rivera in a press release. “I’m proud to come together with my sisters and brothers to fight for a better way of life for working people.”

The Council said Rivera was a trailblazer as a leader of color in the building trades and has worked with members across the region, including teaching bilingual classes on OSHA safety, first aid and CPR.

“Jorge is an outstanding leader and we’re proud to see him take the reins as the Worcester-Fitchburg Building Trades Council president,” said Frank Callahan, president of the Massachusetts Building Trades Council, in a statement. “He’s a longtime champion for workers’ rights, and we believe his passion, dedication, and experience will bring strength to our work throughout the region.” 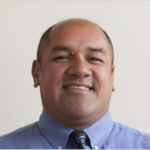