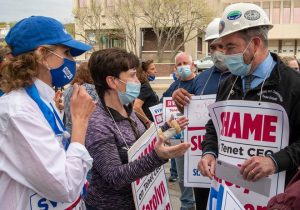 WORCESTER — Members of the Massachusetts Building Trades Council marched in support of striking St. Vincent Hospital nurses Wednesday afternoon, with union leadership encouraging members to boycott the hospital until the strike is resolved.

“Due to St. Vincent and (hospital owner) Tenet Health’s uncompromising stance against their nurses arguing for patient safety we cannot in good conscience send our members and their families there for medical care,” MBTC President Francis X. Callahan wrote in a letter to St. Vincent CEO Carolyn Jackson. “Until you resolve your contract negotiations with the Massachusetts Nurses Association (nurses’ union) in a manner that addresses the issue of patient safety to the nurses’ satisfaction, we will encourage our members to seek their healthcare needs elsewhere.”

Security at the hospital did not allow Callahan to hand-deliver the letter as he had planned, but the hospital said it received the letter and that it remained “committed to the high-quality care we deliver every day at Saint Vincent Hospital.”

“We recognize our patients have a choice when making a nonemergent healthcare decision,” Rhiana Sherwood, a St. Vincent spokesperson said in a statement. “While union organizations may have an interest in supporting each other, our community is demonstrating their continued confidence in us. Our outstanding physicians continue to choose to bring their patients to Saint Vincent Hospital, which is a testament to our continued excellent outcomes.”

Sherwood also said patient volumes have increased more than 15% since February, and the hospital sees an average of 210 inpatients each day and 950 outpatients.

Nurses represented by the Massachusetts Nurses Association have said the current, predominant ratio of one nurse to five patients is unsafe. They are advocating for a 1-to-4 ratio of nurses to patients on medical/surgical floors and telemetry units, in most cases, with a resource nurse to pitch in; increased staffing in the emergency department; and ancillary support in each unit.

Tenet Healthcare, the Dallas-based company that owns and operates St. Vincent Hospital, proposed a 1-to-4 ratio on three of eight medical/surgical floors. It also proposed a 1-to-2 ratio in the progressive care unit and another critical care float nurse to address additional patient loads.

The MBTC is the state’s largest construction labor group, with 63 member local unions representing more than 75,000 men and women.

According to the letter, the union spends more than $1 billion each year, including “millions of dollars each year at Tenet Healthcare,” providing health insurance coverage to 260,000 members, spouses and their families. 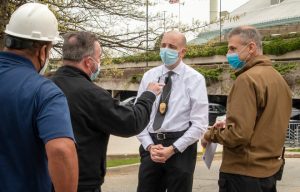 “We pay a lot for health insurance, but in the same vein we want to make sure that (members and their families) get the health care quality and the safety that they are provided for,” Callahan said in an interview Wednesday before the march. “We believe members who pay top dollar for their health care and health insurance deserve the patient care that the nurses are asking for.”

Callahan said that approximately 7,500 union members are from the Worcester area.

“(The nurses) are our sisters and brothers as well,” Jorge Rivera, president of the local Worcester-Fitchburg Building Trades Council, said in an interview, noting that members have been joining nurses on the picket line each Wednesday. “They live in our community, work in our community, they deserve to be treated well.” 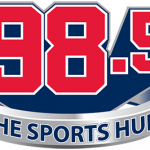 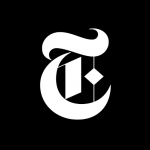