This op-ed appeared in the Burlington Union, Sun Advocate and Billerica Minuteman on November 5, 2019.

The G.I. Bill, the ground-breaking legislation that has helped tens of millions of returning soldiers re-acclimate to civilian life, is turning 75 this year. It has helped generations of brave men and women earn college degrees, buy homes, start families and grow careers.

In short, it has helped them lead better lives.

Of course, over decades, everything requires updating and refining. Societies, economies and industries change and evolve, and with that, the needs of our veterans have changed, too.

Following deployments from two long wars in Afghanistan and Iraq, hundreds of thousands of people have returned from battle looking to start their next chapter in our advanced 21st century economy.

That’s where Helmets to Hardhats comes in.

A national program that helps returning soldiers prepare for and land jobs in the building trades, Helmets to Hardhats has provided opportunities for active and retired military members. In Massachusetts alone, the program, which works closely with the Massachusetts Building Trades Council, has placed nearly 1,000 veterans in good-paying union jobs in the building trades since 2007. That’s 1,000 families heading toward a stable, middle-class life. That’s hundreds of homes being bought and hundreds of communities being sustained. That’s the Massachusetts economy being strengthened, to the benefit of every one of us.

I see the benefits of this program every single day.

I enlisted in the Army National Guard 20 years ago this month, and, assigned to an engineering unit, worked with heavy construction equipment much of the time in the 16 years I served. Because of that expertise, I applied for and was accepted to the apprenticeship program for the International Union of Operating Engineers Local 4.

The four-year program (which took me five years because of my in-theater deployment) trained me for a solid career as a heavy equipment operator, which provided me with a strong, middle-class paycheck, industry-leading benefits and a solid retirement pension plan. For a kid who couldn’t have taken high school less seriously and lacked direction following graduation, this is more than I could have ever hoped for.

I now instruct at Local 4’s apprenticeship program, and work closely with the Helmets to Hardhats team to actively recruit men and women who have served. The skills they bring to the table, acquired during their military service, are crucial in the building trades. That includes familiarity with how to operate and work around heavy equipment. It includes the discipline required to work safely on dangerous job sites. It includes the professionalism needed to work on a team that requires every member to be fully dedicated. And it includes the crucial commitment to being a part of something that’s bigger than yourself. Work ethic, routine and discipline go hand in hand with what you learn in the military and what skills you need on a construction site.

Helmets to Hardhats recognizes these traits aren’t possessed by just anyone coming in off the street. All of the apprenticeship programs for the various building trades are immensely competitive, looking for the most qualified people for a few valued spots. I tell the men and women from my old unit about our program, and many of them have applied and been admitted. I get to see them more now, putting the skills they learned while serving into everyday use.

The G.I. bill helped support the Greatest Generation upon their return from World War II. They served as a replicable model as they completed their education, bought their first homes, began their careers and started their families. They built our modern society. Seventy-five years later, our returning veterans, with the help of Helmets to Hardhats, are doing the exact same thing.

Peter Carpenter is an Instructor at the International Union of Operating Engineers Local 4 in Canton. He lives in Woburn with his wife and three young daughters.

For information on Helmets to Hardhats, please visit helmetstohardhats.org. 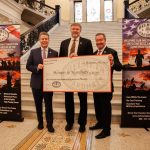