Originally appeared in the August 31, 2019 edition of the Lynn Daily Item, page A4.
By Frank Callahan and Chris Brennan

Look around as you drive through the North Shore. The building boom that has cranes covering the Boston skyline is spreading north. There has been unprecedented growth and expansion in our region in recent years. Labor unions have been at the center of this. And we’re all stronger for that.

The North Shore Building Trades Council’s members are building and developing our cities and towns, and making our region a better place to live, work and raise families.

Labor unions carve a pathway to the middle-class, providing good wages and benefits that allow workers to support their families, buy their own homes, become part of their communities and contribute to their local economies.

Unions also guarantee pay equity and help eliminate income inequality, which is why you’re seeing so many more women on union construction sites across the region. In Massachusetts, there’s nearly three times more women in union apprenticeship programs than in the construction workforce nationally. And 95 percent of all women in Massachusetts are enrolled in Union Apprenticeship Programs, because we’re actively recruiting women for well-paying middle-class careers in the union building trades.

When we set a Project Labor Agreement on a project, we are working first and foremost to ensure that the benefits of that development are shared by everyone: residents, tradeswomen, people of color, and everyone else that goes through our multi-year apprenticeship and builds our communities.

We are constantly working on projects that give back to our communities, raising up our cities, putting more skilled union workers on jobs, and ensuring they are paid good union wages and benefits. The Salem Power Plant, a job that was completed under a Project Labor Agreement, saw thousands of union workers participate in a job that brings cleaner energy to our region with the brand new over $1.5 billion plant. North Shore Medical Center was built under a Project Labor Agreement, making sure only the most skilled labor went into its construction, providing an on-budget, on-time project that directly benefits our community.

Not only do we build medical centers and public utility facilities, but we also build housing, like the Gateway North community in Lynn, which is financed by union pension dollars, specifically the AFL-CIO HIT (Housing Investment Trust). That ensured the work was done by union labor and was made affordable for the community in which it was built.

We’re in our communities off the job, as well. When our cities celebrate with street festivals or public art installations, unions are the first to donate their time and skilled labor. A recent example is the “Beyond Walls” street art festival in Lynn, where the District Council 35 Union Painters sanded and prepped the walls, and International Brotherhood of Electrical Workers Local 103 electricians provided lighting for the festival’s walkways.

There are countless reasons why developers and contractors rely on highly-skilled union labor. For one, it eliminates the sticker shock by ensuring projects are built on-time and on-budget by the best-trained workers. It also guarantees that the workforce is local. While nonunion workers often come from out of state, the same isn’t true for the union building trades. It makes sense for North Shore folks to build the North Shore. It boosts our regional economy since the dollars earned here will be spent here.

We’re also doing our part to ensure the region’s skilled tradespeople are able to build their futures and provide for their families. Massachusetts’ building trades unions spend more than $1 billion every year on healthcare, covering more than 260,000 children, spouses and construction workers across the Commonwealth. And we invest over $55 million every year for members to train at more than 40 state-of-the-art training facilities, ensuring we have the best-trained workforce in the country.

The hardworking men and women in the North Shore Building Trades unions have proudly built the North Shore and the surrounding area from the ground up, and we’re just getting started. There are dozens of projects being planned over the next several years that will modernize and improve our region. This Labor Day, let’s ensure that they’re built by local families with a focus on equity, safety, and strengthening our city’s middle-class. 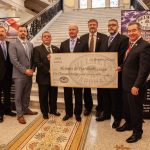